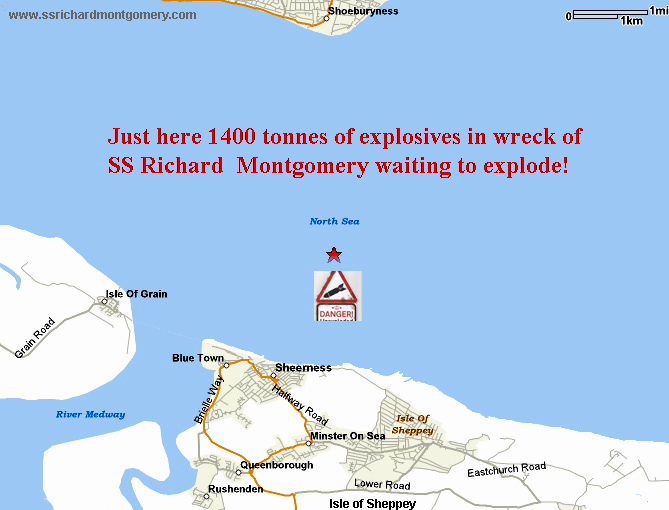 The Liberty ship SS Richard Montgomery wreck. Follow links from this page to more on and off site information about the dangers wreck presents.

The Liberty ship SS Richard Montgomery is a time-bomb waiting for a terrorist to give Britain its first real tsunami and worse. This shows what could happen when a government conceals something very dangerous from its own people.

Fact: The US explosives carrier SS Richard Montgomery sank in the Thames Estuary in August 1944. It was loaded with 1500 tons of explosive munitions. The Admiralty decided to leave the wreck and its dangerous cargo undisturbed. The wreck lies just a few hundred yards offshore between an oil refinery and Gas storage facility near the Kingsnorth power station and the Sheppey coast. Southend on Sea is just a couple of miles away on the other side of the Thames estuary. Rumours about the ship and its cargo have circulated in these towns ever since. Denials have been issued by ministers in the House of Commons in response to MPs questions about the presence on board of biological, chemical and Mustard Gas warheads. Freedom of  information act requests have not been fully answered or complied with. Nevertheless, rumours persist that the real reason the wreck was not made safe was because of the existence of dirty weapons on board.

A new serious risk interesting problem has arisen, as the National Grid LNG storage on the nearby isle of Grain, has the largest one million cu metre storage capacity of Liquid Natural Gas in Europe with the largest surface silos in the world, each bigger than the Albert Hall, that would be instantly demolished by the Montgomery blast and vaporize the gas to mix with four times its weight of oxygen in the air and produce an explosive blast equivalent of 160 Hiroshima bombs, without the radiation. Destroying everything for many miles around in the UK and Europe. with the resulting loss of many millions of lives, According to Explosives expert  Mike Barker  M.B.E. (Bomb disposal).

The ship is huge not just 3 masts sticking out of the water which is misleadingly all people see. To remove the estimated 10,353 bombs still on board after the first clearance in 1944, 175 skips would be required, each carrying 20 tonnes of bombs!

The wreck looks small from a distance but in fact is HUGE. If  guy in picture was a terrorist Sheppey would have been devastated and maybe a lot of Kent and the French coast! (click to see picture)

Design EC2-S-C1 Liberty ship Stowage and Capacity Booklet.pdf (4.1Mb)  Layout and drawings of a liberty ship. See how big it is!

If a little old lady finds one small hand grenade size WWII bomb in her back garden the police evacuate most of the street!  Yet the government ignore this national disaster waiting to happen in the hope it will go away (It will with a big bang) instead of killing 1000’s of people destroying Sheppey at the very least!  They will not even tell people a safe distance to be for when it happens which will be totally without warning at any time of day or night! Security services keeping the dangers out of the main stream press in case it gives a terrorist the idea of blowing it up which In the light of current events of Britain I am (not condoning or suggesting) but am surprised it has not already happened, as from my website logs can see that the site has been viewed from many countries for years that have a grievance against the UK due to their illegal wars in their countries.

How the government in power when it happens through this or collision from an off course ship or just of its own accord thinks will put a spin on the matter at the international enquiry which will follow without the leaders or at least the member of the DFT being put in prison or maybe worse by the relatives of the 1000s people killed wanting justice for their dead families. How many of the unchecked illegal immigrants pouring into our country everyday which the government it appears is doing nothing to halt are trained terrorists just waiting for orders to be carried out?

Sea mines are another problem for the SS Richard Montgomery wreck, coming up (literally) soon.

There are two types which 100s if not 1000s British WWI-WWII are still tethered on the seabed around the estuary in full working order because of their design. These are magnetic and acoustic mines. Without going into the technical details of these mines basically they are held by an anchor firmly to the seabed by a cable and electrical release mechanism on the seabed independent of the mine itself. When a ship passes over it is detected by sound or ships magnetic field and the release operates allowing the mine which like a buoy has positive buoyancy and goes straight to the surface where it floats partially submerged. Carried by the tide and currents, when it comes in contact with anything explodes. 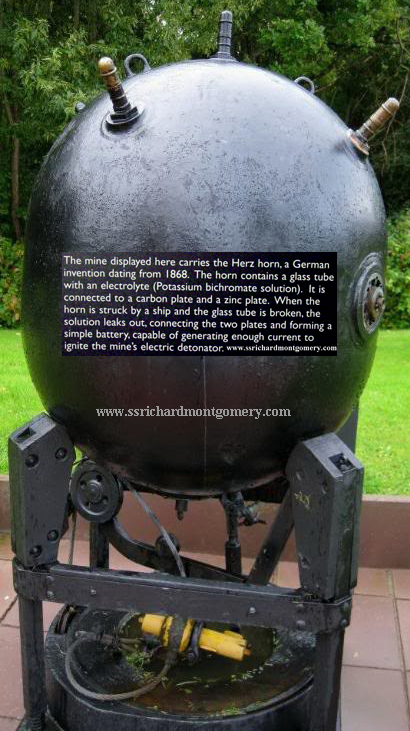 The good news is that the batteries which power these mechanisms on the seabed have gone dead many years ago so passing ships will not trigger them. But the bad news is that after 70-100 years since WWI-WWII the steel CABLE between the mine and its release device which was only designed to last a short time will have become frayed and rusty and in a storm or just on its own with the pull of the mine on it, as many do over the past years at random BREAK releasing the mine to the surface floating into the Montgomery wreck or other shipping without warning. This will become more and more frequent as time goes on. These mines cannot be cleared without divers or mini subs as normal sweeping techniques no longer can be used due to the dead batteries so cannot be remotely released.
Second (first?) worst case scenario hits full gas tanker as it passes near wreck or gas terminal.

The normalcy bias, or normality bias

The normalcy bias, or normality bias, refers to a mental state people enter when facing a disaster. It causes people to underestimate both the possibility of a disaster occurring and its possible effects. This may result in situations where people fail to adequately prepare for a disaster, and on a larger scale, the failure of governments to include the populace in its disaster preparations.
“The assumption that is made in the case of the normalcy bias is that since a disaster never has occurred then it never will occur. It can result in the inability of people to cope with a disaster once it occurs. People with a normalcy bias have difficulties reacting to something they have not experienced before. People also tend to interpret warnings in the most optimistic way possible, seizing on any ambiguities to infer a less serious situation. which for some strange reason appears to be happening in this case, which suddenly will become too little too late.
Which brings me to, although being carried out this appears to be a case of too little too late with public not being informed of progress if any on the matter. With the clock ticking as they say, time is running out.

Seems that the government in their keep it quiet and it will go away wisdom has finally realised there is a problem and it is not going away!  18 February 2019

Link: Freedom of information requests to uk government  regarding SS Richard Montgomery. Some illegally STILL remain unanswered in the permitted time limit. Why, have the government got something to hide? (Updated  22 November 2022)

American Government were conned out of the money they paid to remove the wreck! (Updated 25th November 2022)

Film and Television Director Ken Rowles and his production team based in Kent, near London, have made a feature documentary about the World War II American Liberty ship, the SS RICHARD MONTGOMERY. The ship sank during the Second World War in the Thames Estuary between Kent and Essex. (YouTube preview )

Two letters from Lloyd’s of London insurance to the government agreeing with Mike Barker MBE about the wreck. (pdf)

I have gone through my archives and compiled this pdf file with some interesting information about the condition of the wreck as it was which some may not want known. (6th July 2019)

Maybe a small scale terrible glimpse of the future..... The Silvertown Explosion 1917  YouTube

Free detailed navigation charts of the area around the wreck and other areas close by, must for researchers.
Nightmare in Bari: The World War II Liberty Ship Poison Gas..

1972 report (22 page Pdf) for Southend-on-sea and district chamber of trade and industry of the SS Richard Montgomery.

Photographs approaching and unloading the wreck just before she sank.

The SS Richard Montgomery story is told in this two chapter historic DVD. link to More information and ordering details.

underwater_explosion.wmv (a very small taste of what will happen when SS Richard Montgomery explodes!)

webcam: watch it all happen (or not) live! updated every 5mins during daylight. Tick ZOOM box bottom right picture wreck close up!

This is the reason why the wreck is even more dangerous than people think and reason for delays in removal of the Masts.
The main danger of explosion of the wreck is from one of the many fused live, AN-M1A1 CLUSTER FRAGMENTATION BOMBS aboard. being dislodged and hitting another larger unfused bomb, which is the condition bombs are normally transported in. The cluster bombs are fitted with a safety device which prevents accidental detonation so would normally be safe. The problem is on these particular ones aboard can still explode even if in a safe position. Later ones( but not the many in the wreck) were modified to prevent this from happening. There was a terrible accident one was dropped while being unloaded from an aircraft and exploded pieces found showed at the inquiry that all safety devices were still in a safe position after the explosion. Any movement of the wreck from collision or it collapsing on itself cause this to happen hence the removal of the masts to reduce weight so as to delay this happening although not long term. For details of munitions still aboard and links showing the details of the accident and cutaway pictures of the cluster bombs showing its mechanism and other very interesting information go to:

Facts and history about the Isle of Sheppey

Great And Lost Ships Of The World

Wait! There's more... other unrelated stuff  in links below.

A police officer speaks out suing UK government over vaccinations

This letter To Edward Heath proves UK entry to the common market was illegal so is null and void to start with!

RADIOACTIVITY AND HOW IT AFFECTS YOU (pdf)

Is Your Money Being Tracked? RFID in Euro!

Time travel? sign up now, what have you got to lose?

The Infamous EMU Archive travel stories and other funny tales

True weird sex stories from around the world

Now have a look at the rest of the site, you may find something of interest!

NO word press or Blog on this site.